“We have to declare holy war on what we see, everyday, on television…”

This clip is my daily inspiration as a filmmaker. If I have arrived at a point where I can direct my next feature, it will be because of this director’s work. Some background: German director Werner Herzog, believing that Errol Morris would never finish his film on pet cemeteries, promised to eat his shoe if he ever finished the movie. This obviously provided the necessary motivation for Errol—not only did Werner eat his shoe, he allowed director Les Blank to film it and create the 1980 documentary, “Werner Herzog Eats His Shoe.” As a director, I cannot help but watch this clip and think about my obstacles: I work every day, I don’t have a cast, I do not have professional cameras, I don’t know anyone who produces films, I am afraid that if I create a film I won’t find the necessary crew and I don’t want to ask anyone to work for free, I don’t have a distribution network…The list goes on.

Yet compared to what Errol must have gone through in the 1980s to make “Gates of Heaven” my list is pretty paltry. There is no need for a film lab any longer, all of the editing can take place on a computer, the distribution network is through youtube or google videos or the thousands of film festivals that now exist in every small town, and camera technology exists and is very cheap. So why not? As Herzog says, “I don’t know how he did it. If you want to make a film, steal raw stuff. Sneak into a lab and do it!” Yet today, there are no labs, there are only excuses. If you are on the fence about directing a film, watch this clip and then go direct, and leave me a comment about it and maybe I’ll try some shoe leather.

Last quote, then go watch this:

“We shouldn’t worry about it, we cooked it for five hours…you can have the same experience, you can just drop by a Kentucky Fried Chicken…” 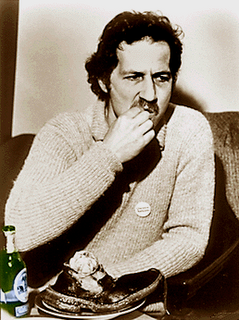