Oscar Nominated Animated Shorts: You Be the Judge 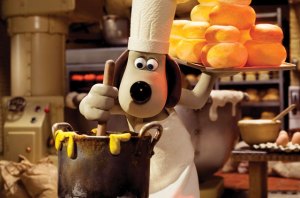 Gromit in A Matter of Loaf and Death

Today has been an extremely eventful day and only now do I have some time to reflect on what happened. Don’t worry people, I will let you know on Monday what happened when everything is for sure. I certainly do not want to jinx it until then.
On that note, I was able to catch the Oscar nominated shorts today at a program at the Nuart in West LA and I wanted to share my thoughts on what was statue-worthy and what was truly bad. After watching so many short films these past couple of weeks, I am starting to feel more confident in my judging abilities. It still remains to be seen whether I can make a successful short, but ideas are stirring. The nominees are:

This was a cute (almost silent) flick about a hoity-toity man who forgets his wallet at a restaurant. Chaos ensues when the bill comes and he must figure out how to pay up. I won’t give anything away but it involves nuns, bank robbers, and the homeless. Joubert has a whimsical, kinetic approach to the short film, which I appreciated, but I felt his plotting left a couple loose ends that could have been addressed in the movie’s eight minutes. Watch it here.

A Matter of Loaf and Death (UK)
Director: Nick Park

OK, here’s my Oscar pick. If you love Wallace and Gromit like me, you have to get your hands on this thirty-minute short; it is absolutely perfect. Filled with soulfulness, wit, and grace, this movie may be half an hour, but it felt like five minutes, I got that caught up. Long story short: Wallace, now working as a baker, falls in love with a serial killer. Park is able to capture the drama, the whimsy, and the energy of the best classic animated shorts. Think one of those classic forties domestic Mickey shorts meets British sensibilities—a must see.

I really liked the concept of this film, a decaying Los Angeles overtaken by corporate insignia, but I felt the execution was a little off. What could have been a truly fun movie to watch was instead sidetracked by needless ornamentation. I felt like I spent sixteen minutes in Times Square. When you make a point in a film and people get it, then it’s OK to move on. I love the graphic design, the animation is perfection, but style is heavily championed over substance, and it shows in this film. Watch this flick here.

This film tells a simple story of a very scary Irish granny telling a bedtime story to a truly terrified girl. Sleeping Beauty takes on epic proportions as we begin to realize that the granny is in fact the evil witch from the story, and then, well, I won’t give away the rest. I thought Kathleen O’Rourke did a superb job as Granny O’Grimm; she certainly frightened me (although I’m an easy scare). I thought that the plot left something to be desired; we really needed more than six minutes to see a real story arc—all we get here is a truncated story. See it here.

The Lady and the Reaper (Spain)
Director: Javier Recio Gracia

Loved the movie and loved the concept; this is truly a sleeper in this year’s pool of nominated shorts. Gracia tells the story of an older woman who really wants to die, but is frustratingly saved by a hunky surgeon. The push and pull between the Grim Reaper and the surgeon is so much fun to watch. This tug-of-war offers so much action, so much movement that it reminds me of the best of Tex Avery. Guys, this is a must see. Watch here.

Now that I provided the links, check them out and let me know what you think in the comments. I won’t begrudge you the eleven dollars you saved either, because I got to see Wallace and Gromit!

This entry was posted in Uncategorized and tagged animated shorts, french roast, logorama, nuart, oscar nominees, oscar race, the lady and the reaper, wallace and gromit. Bookmark the permalink.

5 responses to “Oscar Nominated Animated Shorts: You Be the Judge”