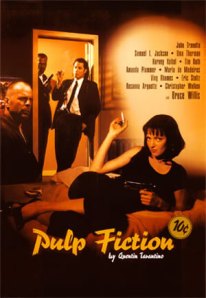 Recently, the trailer to my as yet unreleased movie “Truly Desperate” keeps cycling through my head. Whenever I hear a real cheesy seventies song (Hocus Pocus by Focus, for example) I can picture in my mind’s eye two minutes of cherry-picked laughs, some emotionally gripping thrills and a brilliant logo to cap this series of image-awesomeness. Will I ever get to make this trailer? Probably not. But if I do, I know I’ll be thinking of these next six.

Tell me some of your favorite trailers in the comments.

Gritty. Hardcore. Punk. It’s everything I want to imagine the eighties were like in Australia. Plus that looming logo is amazing. I’m not sure if I even want to see Dogs in Space, but I do want to continually watch the trailer for it.

Side Note: it’s playing at the Silent Movie Theatre on July 15: http://www.cinefamily.org/calendar/thursday.html#dogs. Could it be as good as the trailer? I may have to find out.

You had me at that overlong “An Aries Film Release” title card. And you had me even more during those corny “critic” voiceovers. Why did we do away with those after the nineties? Oh and Harvey Keitel slapping street toughs could provide hours of entertainment.

Of course, there’s no better action movie than Pulp Fiction, so it would be impossible to screw this one up.

“How did they ever make a movie of Lolita?” Just OK I hear, but the trailer’s quick pace, charming take on photography, and overall joie de vivre makes this a must-see.

Rhythmic. Tense. Mysterious. Suspenseful. These are all adjectives that can both describe the Coen Brothers’ oeuvre and this outstanding trailer. I would even recommend not seeing the final film, just watch this—it’s a lot faster paced, too.

Oh yeah, and I had to include a trailer for an upcoming film. I don’t even want to know what Chris Nolan’s up to with Inception, but after seeing this trailer this month, I am hooked. It wasn’t just the droning notes either. Like the best trailers, it’s mysterious, powerful, and leaves just enough questions to hook me. Why is the water tipping? What is Leonardo DiCaprio doing on that helipad? Trailers need not tell the movie’s story, but they have to key into its conceit, whether external or internal to the film’s universe. The best are visual leading questions, the kind that lead audiences back to the movieplex, cash readily on hand for the next Sunday matinee.

Of course, there’s no better action movie than Pulp Fiction, so it would be impossible to screw this one up.

This entry was posted in Uncategorized. Bookmark the permalink.

2 responses to “My Favorite Trailers”