On Bellbottoms and Being Dated 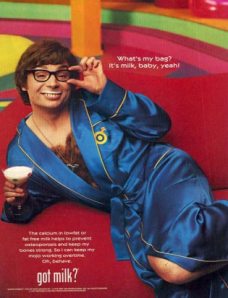 Hollywood has certainly benefited from new technology. I mean, we’ve made it a long way from silents to Technicolor IMAX 3D THX sensations. Every aspect has improved, that is, except screenwriting. The number of nineties movies I’ve seen where the hero whips out a huge cell phone or a milk crate-sized laptop are countless. Not only does it take me out of the movie’s “high-tech reality” it also provides a sort of inappropriate comic relief: “Man, does Arnold look like a loser with that giant Nokia!” That’s the definition of dated for me—some gadget, saying, or set piece that is so old it looks like an anachronism even then.

Sometimes this datedness can serve as camp humor. Austin Powers does this well—I mean, who can forget the secret agent man’s rotating bed? Other times, it just comes off as, well, crap.

Here’s where dated falls flat. I’m invoking show don’t tell here and won’t even comment on the seventies excess of this next video. Sorry, Neil Sedaka. I love the song, not the bell bottoms.

Here’s the hard part: how to avoid being dated. I don’t have a very good answer. Everything we write now will look a little creaky in ten or so years. Writers simply don’t know enough to predict what trends have staying power (let’s just hope it’s not Justin Bieber). The myth that by not including any references to pop culture or appliances will save your story is bunk. Everything is influenced by everything else—even the simplest word choice can reflect a time more correctly than any reference. The best stories do include a historical context—that’s not a bad thing. Commenting on the absurdities of one’s generation could even be considered a writerly rite of passage.

Only when those references become the focus of the story do things fail. So, my advice is to focus on the transcendent stuff—relationships, emotions, people, thoughts, feelings, ideas. The rest, no matter what, is window dressing after all. Sure, the material changes, but the other stuff doesn’t. No matter how we change, we’ll always fall in love, we’ll always fall out of love, we’ll always grapple with death, life, birth, all of those big issues: no matter whether we are doing it via telephone, iPhone, or iPad (hopefully while not listening to Justin Bieber).

So, what are your thoughts? Do you worry about being dated? Is this even a concern?

5 responses to “On Bellbottoms and Being Dated”