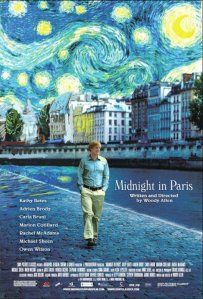 Woody Allen’s latest feature, Midnight in Paris, is a deft, if not brilliant return to form inspired by the City of Lights. He captures the excitement, energy and romance of a make-believe 1920s Paris, duly compensating for the movie’s lack of depth.

Gil (Owen Wilson) is a down-and-out screenwriter (a self-described “hand for hire”) sick of Hollywood on vacation with his fiancé Inez (Rachel McAdams) in Paris. Unhappy with his career, his impending marriage, and his present choice of decade, Gil morosely walks the streets of Paris, dreaming of his novel. When he stumbles upon a magical time-machine that transports him to interwar Paris, his life changes for the better—especially after he meets the lovely flapper Adriana (Marion Cotillard). Gil must ultimately choose between a good life back in the present or a bohemian one lived dangerously in the past. It’s this decision that drives the movie.

But Gil’s dilemma is not a hard one, and the ending leaves us with no surprises. This movie may not lend itself to deep analysis, but that is not why I recommend this film. It’s the delicious visuals, the surprisingly good caricatures of Moveable Feast regulars, the whole gestalt of 1920s Paris that Allen does so well. Go for Adrien Brody’s Dali impression, or better yet Kathy Bates’ Gertrude Stein. Go because you love Paris and can’t afford a plane ticket. It lacks the seriousness of You Will Meet a Tall Dark Stranger or the shtick of Whatever Works, but is nevertheless a treat, an Allen film shot through with optimism, a nostalgia trip that actually makes you feel good about living in the present.

This entry was posted in Movie Review and tagged midnight in paris, owen wilson, woody allen. Bookmark the permalink.